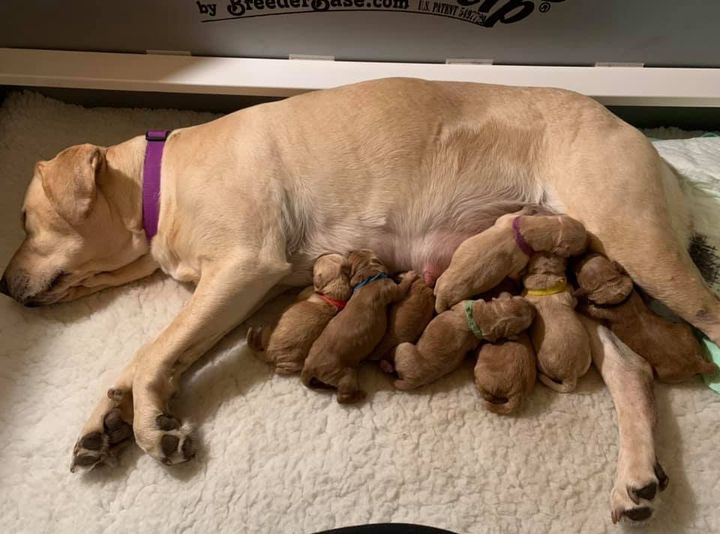 Dog breeders have access to medication to delay estrus. However, induction of estrus is rarely if ever attempted. This publication is a review of current literature regarding three pharmacologic methods for manipulating the estrous cycle in the female dog, and concludes that the challenges are such that induction of estrus in canines is not recommended at this time.

Dog breeders are faced with many challenges when planning breedings. One especially difficult challenge is the infrequent and sometimes unpredictable nature of the canine estrous cycle. The estrous cycle is defined as a period from one ovulation to the next in which ovulation is considered Day 0. The domestic female dog is non-seasonally monoestrous: they ovulate only once or twice a year, with very few exceptions. Proestrus indicates the beginning of the estrous cycle. The interval between the onset of one proestrus to the next is referred to as the interestrous interval (IEI), which is unique to dogs. The IEI includes proestrus, estrus, metestrus (sometimes called diestrus), and anestrus. The average IEI is 31 weeks with a range of 13 to 56 weeks. The IEI varies between individuals, breeds, health, the size of the dog, and the length of anestrus (the quiescent phase when the sexual cycle rests). Figure 1 is a schematic diagram of the canine estrous cycle. Estrus or ‘heat’ refers to distinctive behaviors during the estrous cycle when the female is sexually receptive. Example behaviors include: standing to be mounted, swelling of the vulva, and tail flagging.

Some female dogs may experience a phantom or pseudo-pregnancy following estrus with many of the same behaviors they exhibit with a pregnancy. Normally the condition resolves on its own, but if it doesn’t, there is medication (megestrol acetate) available to resolve the symptoms and end the estrous cycle sooner.

However, what if we want to induce estrus sooner?

Synchronizing estrus in livestock is a common management strategy used to reduce the cost of labor and increase productivity. Manipulating the canine reproductive cycle to occur at more optimal times may be similarly advantageous. Raising puppies is a very labor intensive process, and there are several reasons a breeder might want to manipulate a dog’s estrus cycle. For example, a breeder for hunting dogs may not want to miss a hunting season with his best female, preferring a spring litter instead. Additional reasons might include availability of a specific stud, avoiding too many dogs cycling at the same time, previous failed conceptions, or preference for a season with weather more conducive to training. This review evaluated pharmaceuticals that may be effective at manipulating the female estrous cycle. 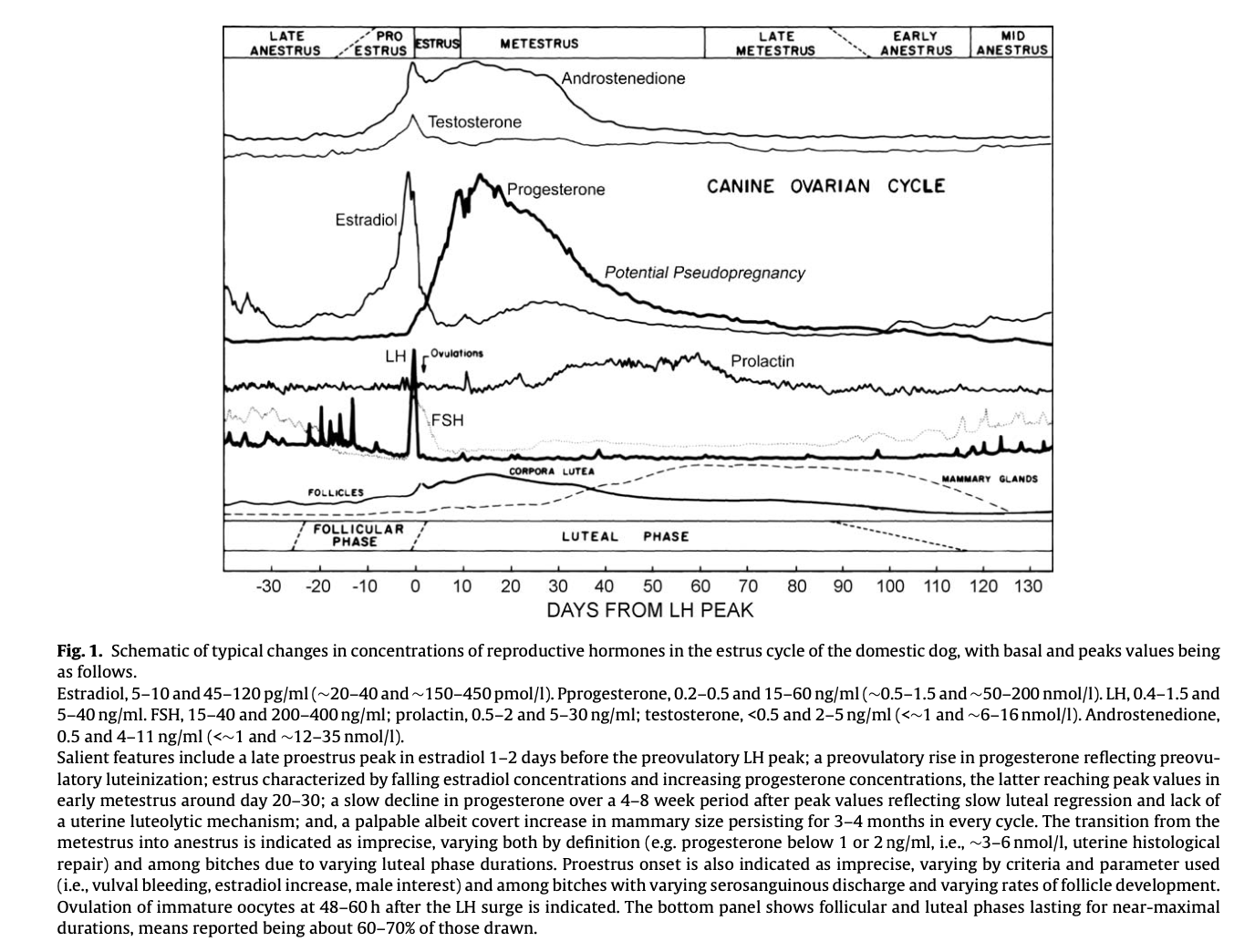 In this article, three pharmacologic methods were reviewed to manipulate the female dog’s estrus cycle: dopamine agonists, gonadotropin releasing hormone (GnRH) agonists, and administered (exogenous) gonadotropins. Their efficacy at inducing estrus varies greatly, as does the rate of successful pregnancies. Some of the practices are questionable, and methods for inducing estrus must be safe and reliable. Overall, estrus induction is most successful in females that are at least 120 days past the beginning of their last proestrus. Studies demonstrated that ovulation induced after metestrus rarely resulted in pregnancy.

It was previously believed that prolactin needed to be inhibited for estrus induction in dogs to occur. Prolactin is a protein produced by the pituitary gland and is responsible for mammary gland development and milk letdown. Dopamine is a prolactin inhibitor; the more dopamine present, the less prolactin. Dopamine directly affects the ovaries of horses and rats, but it is unknown if there is a direct steroidal effect in the dog ovary. Bromocriptine, a dopamine agonist, didn’t lower prolactin, but was still able to shorten the IEI. Furthermore, a low dose of a serotonin receptor antagonist will reduce prolactin, but is unable to induce estrus. This suggests that the mechanism by which dopamine affects estrus is unknown, but doesn’t entirely rely on lowering prolactin.

GnRH is secreted in the hypothalamus of the brain and mediates the release of luteinizing hormone (LH), which triggers ovulation, and follicle stimulating hormone (FSH) which increases follicle growth on the ovary. Progression from early to late anestrus is characterized by a higher concentration and a greater number of GnRH pulses as well as an increase in pituitary sensitivity to GnRH.

Different approaches have been investigated to directly stimulate GnRH and GnRH agonists to induce estrus. Administration of pulsatile GnRH, constant infusion via subcutaneous osmotic pump, or implant at relatively low doses (0.0002-0.0004 mg/kg) is sufficient to induce an increase in LH that is similar to what normally occurs during proestrus, the stage right before estrus. The dose of the GnRH agonist must be large enough to stimulate the initial increase in LH and FSH but not so high that it prevents the spontaneous preovulatory surge in estrus. It needs to be administered for at least 10 to 13 days but removed shortly before or at the time when the LH surge typically occurs. Although these methods resulted in rapid and dependable estrus induction, pregnancy rates varied from 8% to 100% depending on the stage of estrous cycle in which the induction was initiated and the protocol used.

The GnRH agonist that has been most widely studied in canine estrus manipulation is deslorelin. No GnRH agonists are currently approved for use in the United States, including deslorelin.

In most mammals, administering FSH and LH alone induces estrus. However, an estrus-inducing protocol with combined dosages of FSH and LH designed to increase naturally-occurring FSH was not successful in dogs. The issue with the protocol was the partially purified hormones: FSH products were adulterated with LH, which may be interfering with the naturally-occurring LH release in the dog, thus disrupting the estrous cycle. (The hypothalamus-pituitary-gonadal axis is very sensitive to even the smallest amount of hormones, and one study demonstrated that LH cross-reactivity from pig-derived FSH lasted 48 hours after administration.)

The most widely studied gonadotropin for estrus induction in the dog is eCG, with subcutaneous or intramuscular routes of administration. Studies using eCG are generally more successful than FSH. Although eCG induces ovarian follicle development, and in some bitches allows spontaneous ovulation, not all animals will ovulate spontaneously, and the use of hCG after eCG treatment is often recommended. The administration of hCG to induce ovulation in dogs is controversial since some studies reported no benefit or resulted in serious side effects. In addition, hCG shows no positive effects on ovulation rates, pregnancy rates, or number of offspring per pregnancy when administered at the onset of or during estrus. In fact, one study found that treatment with hCG early in estrus significantly prolonged behavioral estrus and lowered serum progesterone which could impact pregnancy negatively. Although widely available under the brand name of Folligon, eCG is not commercially available in the United States except in combination with hCG. Unfortunately, the ovulation rate was poor (8 out of 19); superovulation may have occurred, and pregnancy rates were not reported. Numerous side effects have been reported with eCG: immune-mediated reactions, unpredictability of the number of developed ovarian follicles, premature luteal failure with shortened diestrus, pregnancy loss, and even death.

Although several methods for inducing estrus in female dogs exist, they are not without their challenges and various results. Current pharmacologic methods are not very reliable and could cause undesirable side effects. More experimentation is needed to really determine a reliable method with very few side effects though it is conceivable that a reliable method for estrus synchronization in dogs is just not feasible.

If breeders choose to pursue this route, it is important to acknowledge the strengths and weaknesses of each protocol with your veterinarian. Long-acting preparations (eCG, GnRH agonist implants) are convenient for owners and less stressful for the dog, though they are associated with premature luteal failure and reduced pregnancy rates. Therefore, the more reliable method for estrous cycle manipulation in the female dog is the use of dopamine agonists such as cabergoline, with the recognition of potential side effects including coat color changes and vomiting.