The Effect of Inbreeding, Body Size, and Morphology on Health in Dog Breeds 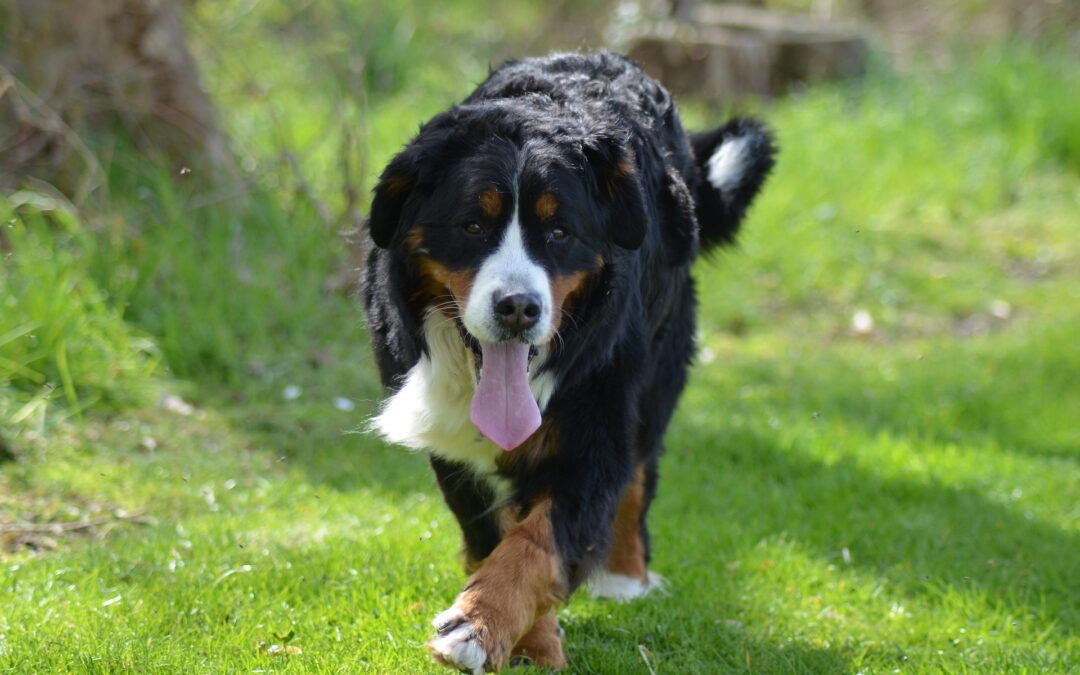 Dog breeds are recognized by their physical features such as size, body shape, coat color and texture, as well as behaviors. Modern dog breeds were only established in the last 200 years. Population bottlenecks and closed studbooks have led to high levels of inbreeding within breeds of purebred dogs. Previous studies have demonstrated that a higher level of inbreeding is associated with negative effects on fitness such as a small litter size and decreased juvenile survival. Breed formation has had the unintentional side effects of increasing the frequency of detrimental genetic variants and reducing genetic diversity. Previous studies have found that breed average lifespan is negatively correlated to body weight meaning smaller dogs live longer than large dogs.

In this study, the authors utilize pet insurance data to quantify morbidity measurements as they relate to breed morphology, body size, and genotypic inbreeding estimates. Here, morbidity refers to the presence of diseases or abnormalities that require veterinary care.

A large dataset of almost 50,000 dogs representing 227 breeds was obtained through commercial DNA testing from Wisdom Health. The average number of individuals per breed was 217.5 dogs, with a range of individuals per dog breed of 30 – 4728. The pet insurance company used was Agria Pet Insurance which is centered in Scandinavian countries. Approximately 40% of dogs in Sweden were insured, which offered a good estimate of the population. Breeds were evaluated based on the 10 breed groups established by the Fédération Cynologique Internationale (FCI). (Note: Dachshunds were grouped with the hounds in group 6 for statistical analyses.)

The researchers used both the coefficient of inbreeding (COI) and genetic heterozygosity (H) to assess genetic diversity in the breeds in this study. H is a measure of how much genetic variability exists in a population: a low number means less diversity exists while a high number means more genetic variability exists and thus contributes to overall fitness for the species or breed. COI is represented as a percentage or probability of the animal (or in this case, an average across a breed) inheriting two copies of the same genetic variant from both sides of the family tree. The calculation they used, which they refer to as Fadj, takes both COI and H into account. Values of Fadj run between 0 (most genetic diversity) and 1 (least genetic diversity). The researchers calculated Fadj for each of the 227 breeds to provide a breed estimate for inbreeding. They then assessed the effect of body weight and inbreeding (Fadj) on morbidity. Morbidity was represented by the average number of non-routine veterinary care events per breed (brachycephalic breeds were excluded from this calculation, since their conformation heavily influenced their health). Morbidity and body weight were compared to different levels of inbreeding (Fadj = .40, .25, .125, 0.0).

There was a significant difference between breed groups for morbidity. The breeds represented in each group can vary greatly by size. FCI group 2, which includes the Mastiff, represented a 45% increase in morbidity compared to group 5, which is composed of primitive breeds. In addition, brachycephalic breeds had significantly higher morbidity than non-brachycephalic breeds. Increasing body weight and Fadj correlated with a greater number of non-routine veterinary care events.

Figure 4 graphs morbidity as a function of body weight (kg) and inbreeding. Correlation lines are shown at different levels of inbreeding (Fadj = .40, .25, .125, 0.0). As Fadj and weight increase, so does morbidity in dog breeds. 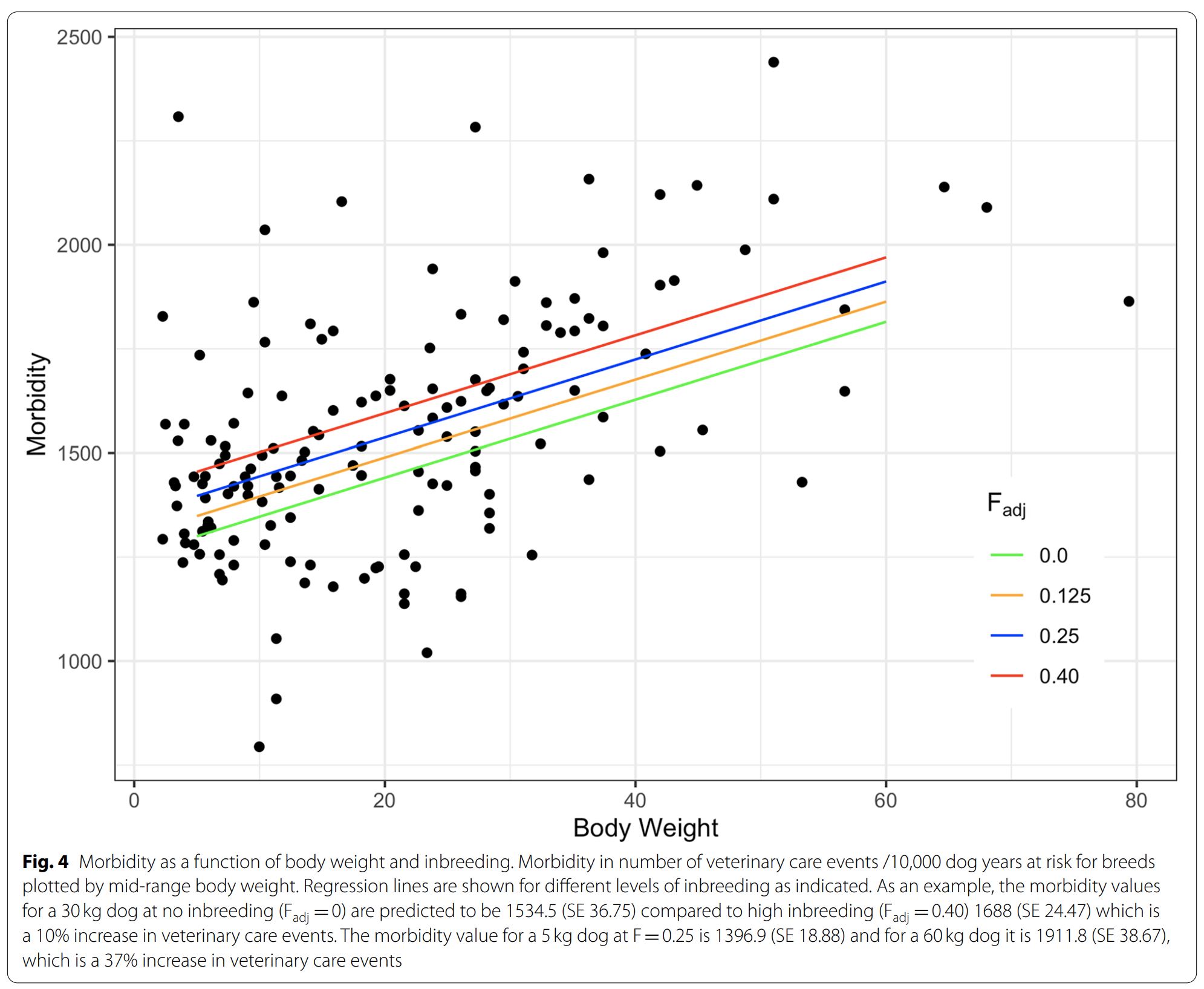 Insurance data on morbidity was used to identify the relationship of body size, morphology, breed average of the coefficient of inbreeding, and health in various dog breeds. The average inbreeding value (COI) between dog breeds was 0.24, which is very high. To put inbreeding values in context, the breeding of two first cousins produces F=0.0625, two half siblings F=0.125 and two full siblings or parent-offspring F = 0.25. Breeds with low inbreeding include recent cross breeds like the Australian labradoodle and Tamaskan Dog as well as landrace breeds like the Mudi, Koolie, and Danish-Swedish Farmdog. This supports the idea that closed stud books, small numbers of founding dogs, or both are the cause of high levels of inbreeding in many other breeds of purebred dogs. These breeds with a low coefficient of inbreeding further demonstrate that breed consistency can be achieved without inbreeding.

There was also a significant difference between FCI breed groups requiring veterinary care. The FCI group 2, which contains breeds like the Bernese Mountain dog, boxer, and Doberman, had the highest average morbidity. The primitive FCI group 5 which contains the Akita, Ibizan and Shiba Inu had the lowest average morbidity. Exceptions to the correlation between inbreeding and morbidity include: the Border terrier, Basenji, Collie, and English setter which have high inbreeding and low incidence of disease. It’s speculated by the authors that the good health of these breeds, which are not known for extreme morphologies, could be due to the elimination of deleterious alleles from the genome. Conversely the Belgian Malinois and the Pomeranian have lower inbreeding and higher incidence of disease. The bad health of these breeds could be due to conditions linked to phenotype or a high frequency of disease-linked alleles. Differences between insurance data and inbreeding data might also play a role explaining these outliers.

It is important to note that one limitation of this study is the fact that the analysis utilizes breed average values rather than data from individual animals. Using breed average values could both overestimate or underestimate the effects of inbreeding on breed health. However, inbreeding values from this study were comparable to values identified by previous researchers. Previous studies have reported varying results on the effect of inbreeding on mortality. This could be due to the fact that consistently high levels of inbreeding in purebred dogs mean there is not enough variation in the level of inbreeding to be able to detect an effect. In other words, all breeds show a similar high level of inbreeding, and hence, we don’t see much difference in lifespan that can be explained by the average breed-specific inbreeding level. (However, see the summary of Kraus et al., 2022 for another potential explanation of this effect.)

Consistency within a breed can be maintained without high levels of inbreeding. Breeding populations with high levels of inbreeding should be carefully managed using genotyping technologies to avoid additional genetic loss. To reduce morbidity and non-routine veterinary care events within dog breeds, greater focus must be placed on increasing genetic diversity within breeds. This may be achieved through outcrossing programs which will improve the fitness of different breeds.

This study suggests that greater morbidity in dogs is linked to an increase in size as well as inbreeding levels. It also suggests that increasing body weight and decreasing genetic diversity correlated with a greater number of non-routine veterinary care events. Additional studies are needed to evaluate the relationship between health and inbreeding at the individual level.