How Size and Genetic Diversity Shape Lifespan Across Breeds 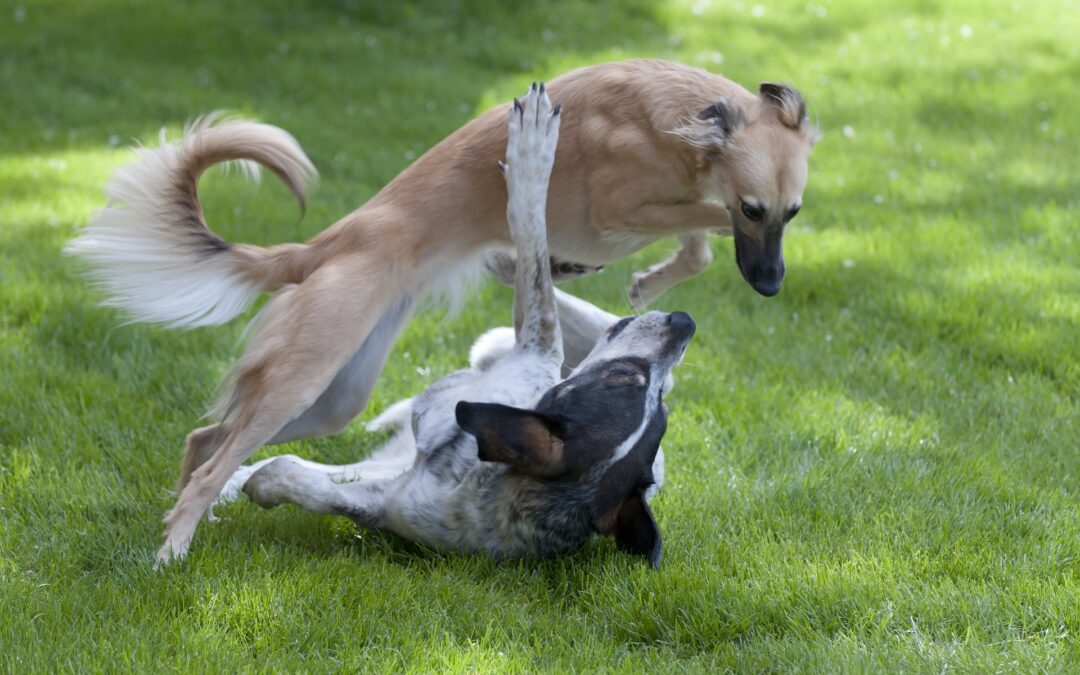 by Dr. Cornelia Kraus (first author of the study)

This study investigates the relationship between lifespan and size as well as genetic diversity across dog breeds after removing a common source of bias in breed-specific lifespan estimates. It also sheds light on how two common causes of death – old age and cancer – contribute to the relationships found.

The lifespan advantage of small and mixed breed dogs is well documented, but it is less clear how inbreeding or genetic diversity affects lifespan across breeds. Since inbreeding depression has been documented in wild, captive, and domestic populations of many species we would expect breeds with less genetic diversity to have shorter average lifespans. As expected, breeds that are more inbred do show a higher burden of overall morbidity (Bannasch et al. 2021), but in an earlier study no negative effect of inbreeding level on lifespan across breeds could be identified (Yordy et al. 2020).

One possible reason for this counterintuitive finding could be the lack of high-quality data on breed-specific lifespan which often suffer from various types of bias. Right-censoring bias occurs if dead dogs from more recent birth cohorts are included in the lifespan estimate, because dogs of these birth cohorts that will enjoy a longer life are not included (a birth cohort is a group of individuals born during a given time period, e.g. a year; see appendix figure for a visual explanation of the right-censoring bias). To test if this bias might have masked the effect of genetic diversity on lifespan, the authors corrected for it by including only completed birth cohorts in their breed-specific lifespan estimates, i.e., (almost) all dogs of these cohorts had died off.

The authors used owner-reported age at and cause of death data on more than 40,000 dogs of 118 breeds from koiranet, the database of the Finnish Kennel Club. After excluding extrinsic causes of death such as accidents, they derived several mortality parameters for each breed:

Additionally, as a measure of changes in popularity, the % change in annual registration numbers between 2002 and 2020 was calculated.

Multiple regression analyses were used to quantify the relationships investigated.

Right-censoring bias in breed-specific lifespan was observed for every breed and amounted up to 3 years. It was larger for smaller as well as for more heterozygous breeds, likely due to their longer lifespan. As expected, the bias increased strongly with increasing breed popularity. Interestingly, a stronger increase in popularity was associated with higher heterozygosity. This might be due to new breeds with more genetic diversity becoming popular over time, people switching to less inbred breeds due to health concerns, and/or genetic diversity declining when breeds become rarer.

Size exerted a larger effect on mean lifespan than genetic diversity. Over the range of sizes and heterozygosity values included in the sample the statistical model predicted a difference in mean lifespan of 4.5 and 1.7 years, respectively. Size also showed a stronger correlation with mean lifespan than genetic diversity. In part, this might be because the inherited diseases differ among breeds and ages-at-death differ for these diseases which will add statistical noise to the relationship (e.g., dilated cardiomyopathy in Dobermans kills dogs at an earlier age than degenerative myelopathy in corgis). The heterozygosity data not coming from the same dogs as the mortality data might also contribute to the larger variance around this relationship.

Breed-specific old age lifespan ranged between 9.3 and 14.9 years. On average dogs ‘dying of old age’ enjoyed an additional 2.9 years of life compared to those ‘dying of disease’.

As for corrected mean lifespan, old age lifespan was negatively affected by increasing size, which means that even large dogs that escape dying of a life-shortening disease live shorter than their small counterparts – likely because they age faster. The % old age mortality also decreased with size, which mean that large dogs also have a lower chance to reach and die of what their owners consider old age. Hypothetically, this could be linked to the negative consequences of rapid growth. Additionally, larger dogs with substantial morbidities can be more difficult to manage than smaller dogs, and hence owners might opt for earlier euthanasia.

Increased heterozygosity positively affected old age lifespan as well as the % old age mortality. The higher chance for dogs of more genetically diverse breeds to not succumb prematurely to disease makes intuitive sense. There are many breed-specific disease predispositions in purebred dogs caused by previous genetic bottlenecks and breeding practices. Inbreeding depression is thought to be mainly caused by deleterious recessive alleles. Hence, we would expect that on average it is more likely to find homozygosity of recessive disease-linked alleles in more inbred breeds. The longer lifespan of dogs dying of old age in more genetically diverse breeds shows that additionally genetic diversity acts in a more cumulative manner possiblyby slowing down the rate of aging which also has been suggested for mixed breed dogs compared to purebred ones.

Breed-specific cancer lifespan ranged between 6.7 and 13.0 years. Dogs dying of cancer lost on average 2.4 years of life compared to those dying of ‘old age’.

Large size negatively affected cancer lifespan and increased the % of cancer mortality, which is consistent with earlier studies. Cancer risk increases with age and cancer development shares physiological pathways with the aging process. Hence, the faster aging rates of large dogs likely contribute to their shorter lifespan when dying from cancer. The higher risk for dogs from larger breeds to die of cancer is predicted by the evolutionary model of cancer because of the larger number of cells and higher cell division rates.

Cancer lifespan increased with heterozygosity, suggesting that even dogs that die of cancer benefit from increased genetic diversity. As for larger breeds, this might be linked to a higher rate of aging in more inbred breeds. There was only a tendency for a higher % cancer mortality in less heterozygous breeds which is consistent with some earlier studies that did not find a significant mixed breed advantage in cancer death risk. In part, this might be because genetic predispositions for cancer only occur in some breeds. Hence, inbreeding might still affect cancer risk within breeds as has been shown for lymphoma in Golden Retrievers. Additionally, the relationship between genetic diversity and cancer risk might also depend on cancer type (e.g., there is some evidence for a higher risk of mammary cancer in more inbred dogs).

Strength and limitations of the study

Taking advantage of a well-used public database avoided some potential problems found in other studies on canine lifespan. Case selection bias is a concern when using data from referral hospitals. Data from primary hospitals is less biased in this respect, but breed identification is less certain than in this study’s population of kennel club registered dogs. The large sample size and permanent accessibility of the database for owners likely renders the data also more representative than those based on short-term owner-surveys.

Using only completed birth cohort allowed to correct for right-censoring bias, but it has the disadvantage that more recent changes in breed-specific mortality are missed. Additionally, the data on genetic diversity comes from more recent dogs of the (mostly) European breed populations. Causes of death were owner-reported, which lessens the strength of evidence for this part of the study.

The results of the study suggest that:

This study shows that not only small size, but also high genetic diversity benefits lifespan across breeds. Both factors influenced mean lifespan via affecting cause-specific lifespan and the proportion of dogs dying of old age, but only size affected proportional cancer mortality significantly. By documenting substantial right-censoring bias in breed-specific lifespan estimates, the study also emphasizes the need for high quality mortality data in canine epidemiology.

Appendix (not in the paper): Visualizing the right-censoring bias

The figure below shows how right-censoring bias leads to underestimating average lifespan. For birth cohorts after 2002 dogs that are still alive at the time of sampling are not included in the sample. Therefore, the more short-lived dogs of these birth cohorts will bias the estimate of average lifespan downwards. The underestimation will be especially large if the population is growing rapidly (young populations), because there will be many dogs in the more recent birth cohorts. 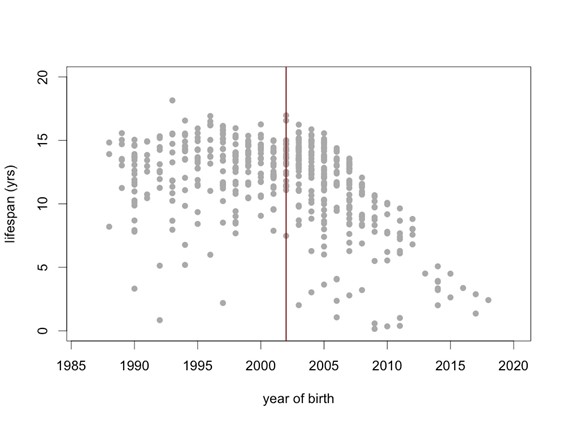 Figure. Lifespan data for birth cohorts from 1988 to 2020. The red line is at year 2002. Average lifespan for later birth cohorts declines because of right-censoring bias. Example breed is whippets, data are from koiranet.