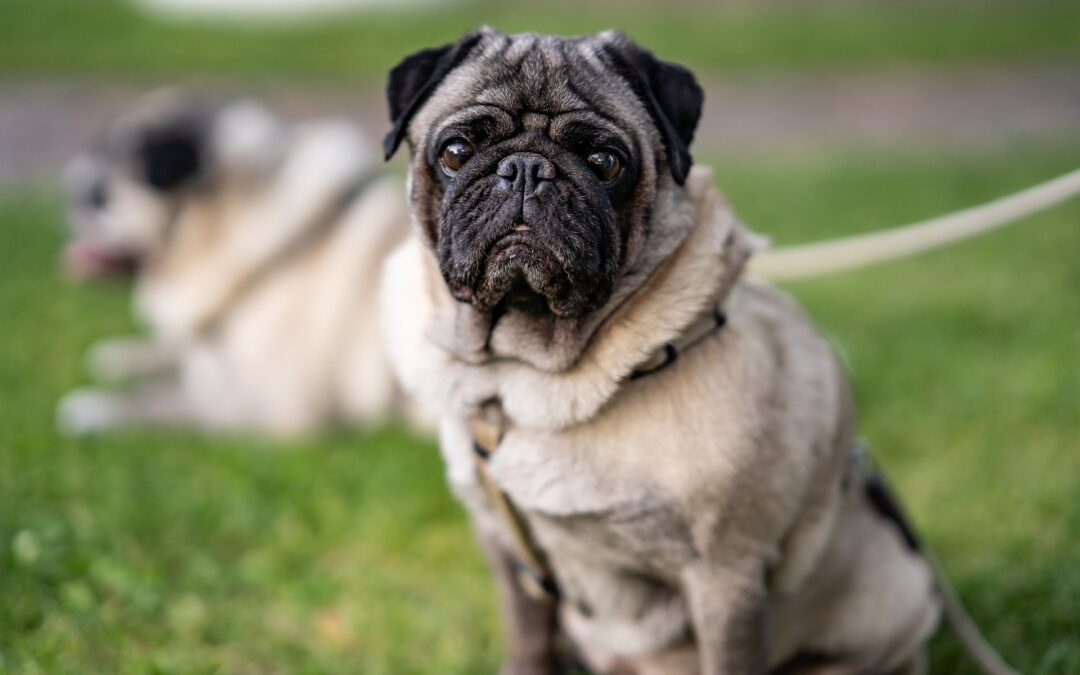 Brachycephalic obstructive airway syndrome (BOAS) is a conformation-related disorder. Breeding for extreme brachycephaly (“short head”) has led to very short facial skeletons, but because the soft tissues have not been proportionally reduced, this results in an increased risk of airway obstruction. The symptoms of BOAS include noisy breathing, disturbed sleep, exercise and heat intolerance, as well as gastrointestinal problems. In the worst cases the disease can be lethal, and it has been hypothesized that BOAS strongly contributes to the reduced life expectancy of some brachycephalic breeds. Surgery can mitigate, but often not fully resolve the symptoms. The welfare issue caused by BOAS is exacerbated by the fact that these breeds have become very popular, and that many owners do not recognize the clinical signs of the disorder. Previous studies point to an especially high prevalence of BOAS in three extremely brachycephalic breeds: pugs, French bulldogs, and bulldogs.

While many internal, anatomical characteristics have been linked to BOAS risk, easily applicable, non-invasive measurements are needed to help breeders selecting away from BOAS. The goal of this study was to identify such breed-specific, external conformational BOAS risk factors for the three high-risk breeds. Furthermore, the authors tested the reproducibility of these measurements to evaluate their potential as useful measures for breeding decisions.

All statistical analyses were conducted within breeds to account for breed specific facial and body differences. To assess inter-observer reproducibility a subset of dogs was measured by two investigators. Several ratio variables were computed based on the soft-tape measurements: craniofacial ratio (CFR) = SnL/CL; eye width ratio (EWR) = EW/SL; skull index (SI) = SW/SL, neck girth ratio (NGR): NG/CG; neck length ratio (NLR) = NL/BL. In a first step, they tested how well the variables of interest can predict the risk of being BOAS (+). The second step was to validate the risk factors identified in the first set of models based on functional grading using the BOAS index.

Generally, most of the soft-tape measurements and the derived ratio variables showed only low to moderate inter-observer reproducibility.

Pugs – Inter-observer reproducibility was good for SnL, CG and CFR. When tested singly, only EW of the soft tape measurement and derived ratios correlated significantly with BOAS risk. The model based on functional grading identified female gender, stenotic nostrils, and body weight, as well as an increased EWR and SI as significant risk factors for BOAS. The validation model confirmed this for gender, stenotic nostrils, and SI, and additionally suggested BCS as a risk factor.

French Bulldogs – Inter-observer reproducibility was good for NG and CG but not their ratio NGR. Many of the soft tape measures and derived ratios significantly correlated with BOAS risk when tested singly (SW, EW, SnL, NG, BL, CFR, SI, NGR). The model based on functional grading identified increasing age, stenotic nostrils, as well as an increased NGR and NLR as significant risk factors for BOAS. The validation model confirmed this for stenotic nostrils and NGR. All 4 dogs with a CFR > 0.3 had BOAS 0. A subset of the BOAS III French bulldogs were underweight.

English Bulldogs – Inter-observer reproducibility was good for CG and NGR. Some of the soft tape measures and derived ratios correlated with BOAS risk when tested singly (SW, EW, NG, SI, NGR). The model based on functional grading identified being neutered, a high BCS, as well as an increased SI and NGR as significant risk factors for BOAS. The validation model confirmed this for neuter status and NGR and additionally showed stenotic nostrils to increase BOAS risk.

The inter-observer reproducibility of most of the soft tape measurements and the derived ratio variables was not very good in this study. This means that, while these variables do have explanatory power at the population level, they are less suitable for individual breeding selection (except for NGR in bulldogs). Measuring unsedated dogs in a replicable way can be challenging, especially since the studied breeds typically have excess loose skin (over-nose skin folds, facial wrinkles) and often thick fat coverage. Hence, the authors suggest that more easily accessible factors such as nostril stenosis and BCS could be more useful for breeding selection.

While some of the risk factors for BOAS were breed-specific (e.g. gender in pugs), the study identified two robust risk factors across the focal breeds – nostril stenosis and obesity. Dogs are predominantly nasal breathers, and dogs with moderately/severely stenotic nostrils commonly also have immobile nostril wings which restricts the airway flow even further and often results in poor thermoregulation and negative airway pressure. Almost half of the French bulldogs in the study had severely stenotic nostrils. The authors suggest to not breed dogs with moderately to severe nostril stenosis. The potential negative impact of obesity (BCS) includes an increased respiratory rate, exercise intolerance and lowered oxygen saturation. A phenomenon seen in French bulldogs is that while the majority of obese dogs had BOAS, BOAS III dogs were often underweight which was associated with regurgitation and other signs of gastrointestinal disease likely due to thoracic negative pressure during respiratory distress. Linked to obesity, a high NGR was a BOAS risk factor for bulldogs, suggesting that selection against the relatively thick-necked phenotype would be beneficial.

In an earlier study relatively shorter muzzles (i.e. a low CFR) have been linked to BOAS risk across brachycephalic breeds including extreme ones like the pug to moderate ones like the Staffordshire bullterrier. This finding was not replicated in the present within-breed analyses – a weak association between CFR and BOAS risk was observed only in French bulldogs. The limited variation of CFR within the focal breeds could be one factor explaining this discrepancy. Another complicating fact is that in extreme brachycephalic dogs many of the airway structures compromised by BOAS such as the aberrant turbinates or the elongated soft palate are covered by the cranium, not the muzzle. As a result, airway crowding will not only occur in dogs with short muzzles, but also in dogs with a short cranium. In this scenario, CFR cannot reliably reflect the anatomical features linked to BOAS, since CFR decreases with shorter muzzles, but it increases with a shorter cranium.

Because the conformational and external factors included in the analyses explained less than 50% of the variance in BOAS grades/index, the authors recommend that they should be used in addition to regular clinical assessment of BOAS signs via functional grading. They explicitly warn against breeding towards extremely brachycephalic features.

This study shows that some of the risk factors for BOAS are breed-specific. It identifies stenotic nostrils, body condition score and neck-girth ratio (for bulldogs) as robust, and easily measurable predictors for BOAS risk in all three extreme brachycephalic breeds studied. It also suggests that in these breed populations, other soft-tape measurements cannot be reliably enough measured to be suitable for breeding selection.