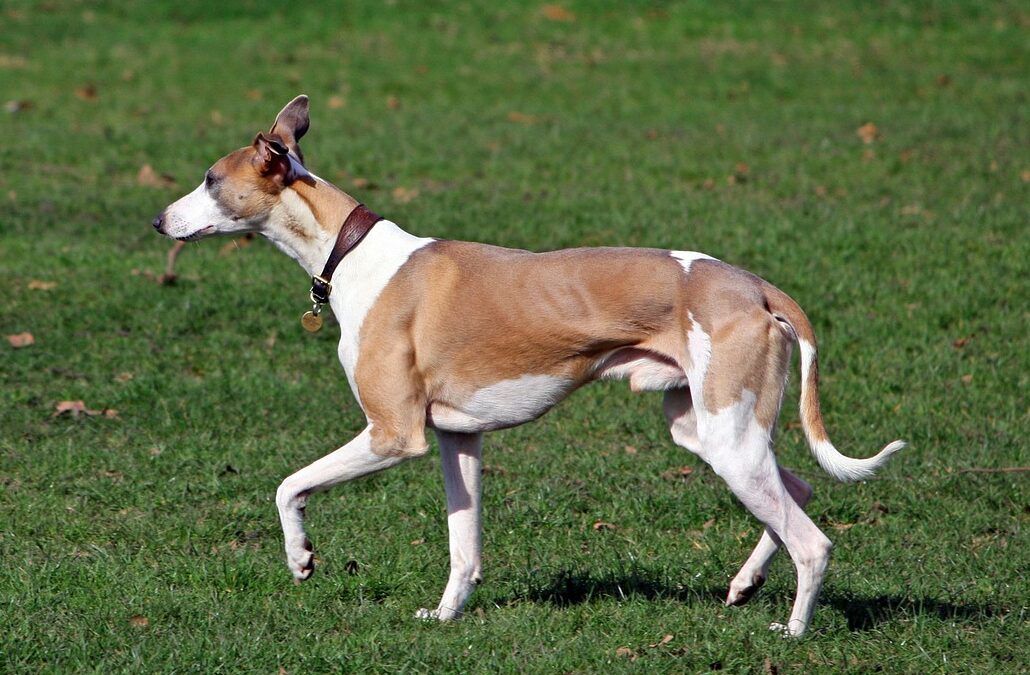 Baranowska Körberg, Izabella et al. “A Simple Repeat Polymorphism in the MITF-M Promoter Is a Key Regulator of White Spotting in Dogs.” PLoS One 2014: 9(8).

This 2014 paper examined the role of mutations in a gene that is known to affect white spotting in dogs. Specifically, this paper looked at polymorphisms (another word for mutations, meaning “different versions”) in the MITF (“microphthalmia associated transcription factor”) gene. The paper looked at the promoter region of the gene. This is a region just before the real start of the gene, which tells the cell exactly where the gene starts in the DNA. Differences in this region would be expected to affect whether and how often the gene is used.

Coat color variation was probably one of the first visible changes that occurred during dog domestication. This is due primarily to selection against wild-type coat color and selection in favor of novel coat colors and patterns, such as white spotting.

White spotting in dogs refers to white areas of a dog’s skin and coat and is caused by an absence of melanocytes (color producing cells) in the skin and/or hair follicles. Melanocytes are also found in the eye and the inner ear and contribute to vision and hearing. This is why white coat color on the head can be linked to vision and hearing issues.

In dogs, there is one major white spotting locus, known as the S locus. In 1957, C. C. Little hypothesized that four alleles existed at this locus, resulting in dogs that can be phenotypically solid colored, piebald, Irish spotted or all white. Mutations at this locus in mice and humans cause disorders in both vision and hearing. This is consistent in dogs, where 2% of all white dogs have bilateral deafness and 18% have unilateral deafness.

It wasn’t until 2006-2007 that this hypothesized white spotting locus was connected to melanocytes, when it was mapped to the MITF (microphthalmia associated transcription factor) gene. MITF encodes for a protein (actually a transcription factor – something that controls the use of other genes) that regulates melanocyte migration to different parts of the dog’s body during the fetus’s development. When MITF is modified by a genetic mutation, melanocytes migration throughout the body is reduced, leaving white coat (spotting) in the places they do not reach. (This paper doesn’t cover the specifics, but because the melanocytes migrate when the fetus is developing, there is some stochasticity – chance – in exactly where they end up, which is why dogs with similar genetics and similar amounts of white spotting have different exact patterns of white spotting.)

Additional experimentation was carried out to examine how two of the mutations, the SINE insertion (a stretch of DNA following a particular pattern known as a “SINE” that was inserted into the gene, disrupting its usual sequence) and a length polymorphism or LP (meaning the promoter of this gene can be different lengths), affected transcriptional activity of the MITF gene. Transcriptional activity means how often or how much the gene is read off of the DNA. One way of “breaking” a gene is by simply turning off its transcription, so that it is never used. The researchers wanted to see if this was happening with MITF.

Individually, both the SINE insertion and the LP mutation resulted in reduced transcriptional activity. When both mutations were present, they appeared to act in an additive manner: together they showed a threefold reduction in transcriptional activity. In other words, these mutations don’t entirely turn the gene off, but they do cause it to be used much less often. These mutations (and probably others) in MITF aren’t “on-off” mutations; they are more like volume control, turning the amount of white up or down.

The conclusions from this study indicate that no single gene, and no single mutation of MITF, is responsible for white spotting in dogs. Instead it appears that the different white spotting phenotypes (for example, Extreme White, Piebald and Irish Spotting) are caused by different combinations of mutations selected for during domestication. In particular, there is strong evidence that the LP and SINE insertion mutations work together to greatly decrease the amount of MITF created in the developing fetus, therefore greatly increasing the amount of white in the resulting dog.

Additional research is necessary to determine if the variability of white spotting phenotypes are caused solely by combinations of different mutations of the MITF gene, or if other genes affecting melanocyte development and migration are also involved.